• Paul McCartney was the official opening act at the CONSOL.

• Bank of New York Mellon had the right of first refusal on naming rights.

• On September 20, 2007 – Gov. Ed Rendell and Allegheny County Chief Executive Dan Onorato announced that the Penguins have formally signed a lease for a new arena that commits them to staying in Pittsburgh into 2040.

• The Penguins sold out all 66 suites for the inaugural season of the CONSOL Energy Center and also have sold out all 32 loge boxes.

• Pittsburgh Penguins and real estate developer Horizon Properties Group have entered into a letter of intent to jointly develop a nationally-franchised hotel on Centre Avenue adjacent to the new Pittsburgh arena.

Have you ever seen a more beautiful slab of dirt in your life?
PAUL STEIGERWALD,Fox Sports Pittsburgh Penguins play-by-play man and emcee of the arena groundbreaking ceremony. 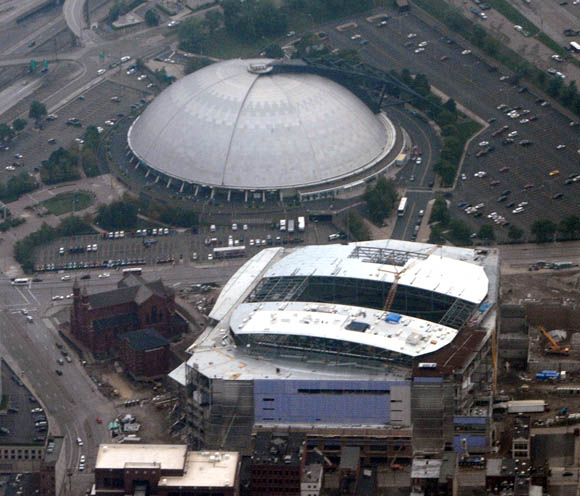 It finally has a name: CONSOL Energy Center. CONSOL Energy Inc. signed a 21-year naming rights agreement with the Pittsburgh Penguins on December 15, 2008.

“We are excited to extend our partnership with CONSOL Energy,” said Mario Lemieux, co-owner and chairman of the Pittsburgh Penguins. “We think there is some great synergy involving one of the nation’s leading energy companies, an energetic young hockey team and this vibrant city and region.”

The Pittsburgh City Planning Commission approved new plans for the arena on May 6, 2008. Commission officials had objected to the original design, saying “the exterior was too cold and uninviting,” but the Penguins and HOK Sport revealed a new design version showcasing the building at night.

Those drawings, Penguins CEO Ken Sawyer said, “really tell the story of the design.”
“The atrium in the front allows everyone to see the energy and electricity inside the building during events. When you’re inside, you get to see the most beautiful city skyscape in the country,” he said. “That’s really the signature part and it came out today in those renderings.”

Completion expected before the 2010-2011 season. No specific target date has been set, but NHL buildings have, in many cases, closed in mid-season, so that team officials could define the “grand finale” without conflict of an uncertain playoff finish.
The total cost of the arena is $321 million, up from $290 million when city, county and state officials announced a deal in March 2007 to keep the Penguins in Pittsburgh by building an arena to replace Mellon Arena, the National Hockey League’s oldest venue.

When the Lemieux Group bought the Pittsburgh Penguins in 1999, the team sought a new arena funded with public money in a deal similar to the ones that built Heinz Field (Pittsburgh Steelers) and PNC Park (Pittsburgh Pirates). The team’s lease at the Mellon Arena expired on June 30, 2007, but the team extended it for two more years as part of a 30-year lease deal for the new facility.

In July 2004, the Penguins sought to link the cost associated with the new building construction with slots profits, thus sparing taxpayers the burden of replacing the 16,940-seat Mellon Arena, which opened in 1961 and is the oldest and smallest arena in the NHL. 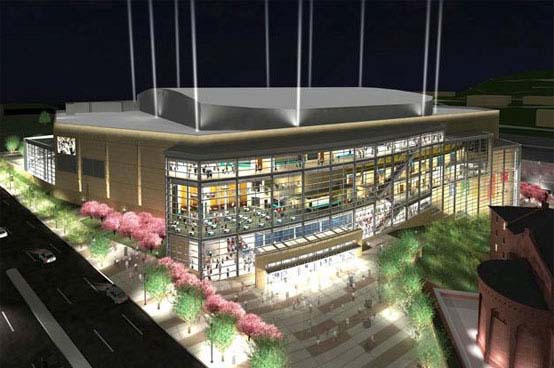 The Penguins planned to pay a $50 million license fee and the cost for one parlor of 5,000 slots, to be located in or near Downtown.
Although professional sports generally try to avoid any association with gambling, the NHL has given its blessing for the Penguins to pursue a slots license. NHL Commissioner Gary Bettman said that league would have no problem with a team owning and operating a parlor, even if it were part of the arena.
“At some point in this process, if there’s no prospect of a new arena, the Penguins are going to have to explore their alternatives,” Bettman said in December 2005. “They simply don’t have a choice.”

“And so, in terms of the Penguins being viable long-term, they need a new arena,” Bettman said.
The site of the former St. Francis Hospital was imploded on March 22, 2008 to make way for the new arena.

Rather than start the slots application process on its own, the Penguins partnered with Isle of Capri of Biloxi, Miss., which filed an application with the state Gaming Control Board on December 28, 2005, for the slots casino.
After partnering on the slots proposal, the Penguins and Isle of Capri formed a nonprofit group called Pittsburgh First, which would have received $1million a year for redevelopment of the Lower Hill District.

If Isle of Capri would have won the bid for the city’s sole slots license, it promised to give the hockey team $290 million for an arena, which would sit across the street from the Mellon Arena between Epiphany Catholic Church and the new $500 million casino. 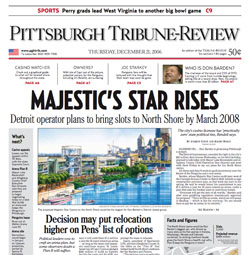 The proposal would have helped the Penguins to build a state-of-the-art 18,500-seat arena for hockey. It would take 18 months to construct.

The two other casino applicants have said they support using gambling money for building an arena. Detroit businessman Don Bardon, who wanted to put a Majestic Star Casino on the North Shore, said he would pay $7.5 million a year for thirty years to help pay for an arena.

Under those plans, the Penguins would pay more than $4 million a year toward the arena. The state also would contribute other slots money to the project.

The state’s Gaming Control Board awarded the slots to Don Barden and Majestic Star December 20, 2006.Ã‚Â After winning the casino license Barden reaffirmed his Plan B commitment of $7.5 million a year for 30 years for the new arena.

September 20, 2007 – Gov. Ed Rendell and Allegheny County Chief Executive Dan Onorato announced that the Penguins have formally signed a lease for a new arena that commits them to staying in Pittsburgh into 2040.

The lease formalizes an agreement reached on March 12, 2007.

The arena lease means the SEA will be able to close on a $325 million bond issue to finance construction. The bonds could be issued by October 2007.

The Penguins, casino developer Don Barden and the state’s casino-financed development fund will pay for the bonds. The Penguins decideded to delay the opening of the building until the start of the 2010-11 season rather than rush to have it completed for at least a portion of the 2009-10 campaign.

Spokesman Tom McMillan said the team will lose a couple of months of revenue from the new building by delaying the opening, but in the end felt it was prudent to ensure quality design and construction.

“The right thing to do is to do it the right way,” he said. “The matter of a few more months will enable us to do that.”
The Pittsburgh Post-Gazette reported that the Penguins may commission public art to fill some of the space. The team, said HOK architect Wayne London, also is looking for sites for a “statue of a well-known player for the region,” referring to Penguins Hall of Famer and owner Mario Lemieux