• 1920 was the first year hockey was played in the Olympics played in early April as part of the Olympic Summer Games in Antwerp, Belgium.

• The tournament also served as the first World Hockey Championship.

• Teams were comprised of seven skaters, including a “rover.”

• Pittsburgh’s Roy Schooley selected the group of players to represent the U.S.

All games were played at Duquesne Garden.

The majority of the players on the team are practically all Canadian.

OTTAWA JOURNAL, 1920 newspaper article questioning the citizenship and eligibility of the U.S. team

Hockey was over only for Emmy Garrett, Nick Kahler and Frank McCarthy (St. Paul Athletic Club players) on March 16. Roy Schooley named the 1920 United States Olympic Team. Schooley was a naturalized American from Welland, Ontario, who had come to Pittsburgh in 1901. He had begun his career as a referee and subsequently had become manager of both Duquesne Gardens and the Pittsburgh team. As manager of the Olympic squad he had full power to select the players. Schooley knew his own team well enough and now had evaluated the talent on the Boston and St. Paul clubs. Off St. Paul he selected Goheen and Conroy as forwards, Fitzgerald on defense, and subsequently, Cyril Weidenborner as the back-up goaltender.

The four would join Joe and Larry McCormick plus Herb Drury from Pittsburgh. Also on the team were George “Gerry” Geran and Frank Synott of Boston, as forwards. Irving Small and Leon Tuck, both of Boston, were the other defensemen, and Pittsburgh provided Ray Bonney in goal. Joe McCormick was named team captain a day later.

At the same time Schooley was making this announcement, William S. Haddock, the number two man at the ISHU (International Skating and Hockey Union), unveiled plans to fund the team’s trip to Europe.

Approximately $15,000 was needed, and revenue from exhibition games would be the source of funds. The intent was to play two series of two games each at Duquesne Garden. The first series on March 22 and 23 would be against the Winnipegs (not to be confused with the Monarch or the Falcons).

Schooley also indicated that the team would assemble in Pittsburgh on March 20 to prepare for the games against the Winnipegs.
Conroy and Goheen were inserted into the Pittsburgh lineup on March 20 in a season-ending game against the Toronto Dentals.

Pittsburgh won 3-2 and the Pittsburgh Post, March 21, 1920, reported that “the St. Paul players played flashy hockey and were applauded by the large crowd.”

In the time between the announcement of the team’s selection and its assembly in Pittsburgh, questions concerning the citizenship status of certain players were raised in the Ottawa Journal, on March 18, 1920. The Canadian newspaper commented that “the majority of the players on the team are practically all Canadian” and then recounted the playing careers of the McCormick brothers, “Dinny” Manners, Ray Bonney, Ed Nagle, and Russ McCrimmon.

The McCormicks were from Buckingham, Quebec, and had served in the U. S. Army in France during World War I. They had just become citizens on March 17. Herb Drury, from Midland, Ontario, had had similar service, but no question was raised about his eligibility, or that of Frank Synott of Chatham, New Brunswick. Ray Bonney was American-born but Canadian-developed, but that was not an issue. Manners, Nagle, and McCrimmon were Canadian citizens and clearly not eligible. A day later, the Journal further raised the issue of the professional status of “Gerry” Geran, a Holyoke, Massachusetts native who had played four games for the Montreal Wanderers in the 1917-18 season.

Reviewing this issue some eighty-three years later, there appears to be no reason to doubt Roy Schooley’s comment, in the Post on March 17, 1920, that “all of the men selected can make the trip and are eligible from the standpoint of American citizenship.”

The McCormicks had just become ctitzens, Drury was naturalized, and Synott was presumably already a citizen. Bonney’s U. S. birth gave him citizenship, while all the AC players were Minnesota natives. Tuck, like Geran, was a Massachusetts native, but from Melrose. Thus the team would be seven native-born and four naturalized players. Small was unable to make the trip to Antwerp, and Geran’s previous professional career was not raised further as an issue.

Geran, along with Tuck and Synott, arrived on the morning of March 22 in time to work out with the team for the first exhibition game against the Winnipegs that evening. The Winnipegs’ most notable player was defenseman Mervyn “Red” Dutton, who would have a Hall of Fame career as a player, coach, and NHL president. Despite the late integration of the Boston players into the lineup, the Americans triumphed 4-3 as Geran and Joe McCormick each scored twice.

The Winnipegs came back the next night to edge the U.S. team 3-2. Geran and Drury got the American goals. Although they lost, the (St. Paul Pioneer Press, March 24, described Geran and Goheen as “bright stars” and added: “Goheen thrilled the large crowd by his sensational dashes down the ice, but was unfortunate in his shooting.”

Since each team had won a game, it was decided to hold the Winnipegs over for a third game on March 25. Drury had had an unruly first game in which he was ordered off the ice after a physical altercation with the referee following a roughing call in the second period. He had returned for the third period, but there were now calls for his removal from the team. It was rumored that Frank Downing of Boston, whom the AC’s would face in 1922, would take his place. When the puck was dropped for the final game, Drury was back on the ice.

The Winnipegs took the lead at 11:01, but soon thereafter St. Paul made its presence felt. “Conroy came down the ice like a streak of lightning after shooting three times unsuccessfully (and) finally managed to pull Tupper away from the net and sent the disc in for the tieing score.” reported the New York Times on March 26, 1920. There was no further scoring in regulation or in the first five minutes of overtime, but Joe McCormick gave the United States the 3-1 victory with two goals in the second overtime period. (Sudden death was not necessarily played outside the NHL at this time.)

The Pittsburgh Post on March 26 reported that any shortfall in funds raised by the Winnipeg series and the two that Pittsburgh would play on March 26 and 27 would be covered by Duquesne Garden.
The Hamilton Tigers would furnish the opposition for the locals as the Post, on March 25, 1920, observed that these were not Olympic team games. (The March 29 and 30 dates had been dropped.) Despite that fact the Boston players were in the lineup on the first night as Goheen and Fitzgerald officiated. The other Olympians rested. Hamilton, with future NHL players Carson Cooper and Leo Reise, won 4-3. Geran had one of the Pittsburgh goals. 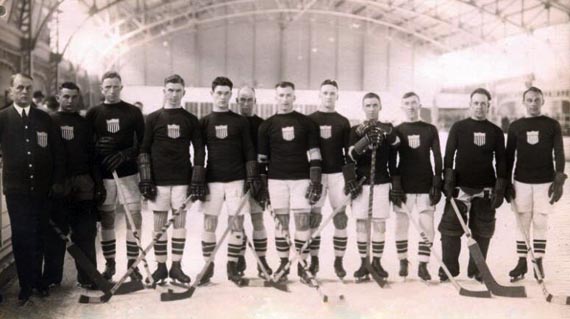 The following night it was Boston’s turn to rest as the Pittsburgh and St. Paul players gave the Steel City team a 5-0 victory…

The team was now slated to assemble in New York on April 6 for departure on the steamer Finland the next day. Prior to leaving for New York, Pittsburgh played two games against Kitchener, Ontario, winning both by 5-4 and 3-1 scores. It was another opportunity for Pittsburgh’s Olympians to prepare for Antwerp. All played, and Drury scored twice in the first game.

As the Olympians traveled to New York, the Post on April 6, 1920, reported that Schooley had resigned as manager amid rumors of unspecified friction, which he denied. He cited a family illness as the reason and was succeeded by ISHU president Cornelius Fellowes.

Schooley’s departure would be sorely felt in the weeks ahead as the Post prophetically observed: “The absence of the man who organized and coached the Olympiad team since its formation will be a distinct loss to the team.”