• The Pittsburgh Forge would offer several local skaters an opportunity to develop into NCAA Division I players. Three players would end up making an NHL roster.

• The Forge advanced to the finals again in their second season. On April 25, 2003. The Forge defeated the Texas Tornado, 4-2, to capture the Robertson Cup (NAHL championship) and earn a trip to the U.S. Junior A Gold Cup.

About 20 players over the last three years had to leave here (Pittsburgh) to find the proper competitive situation to prolong their careers. Now, they know they don’t have to leave here at the age of 15 or 16

“Great moments are born from great opportunity,” Herb Brooks said as he guided the USA to gold at Lake Placid in 1980. Brooks known as developer of amateur hockey, had in indirect impact in developing local hockey players. 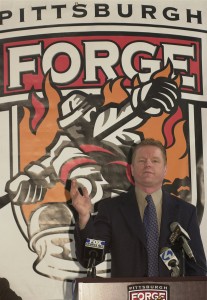 Pittsburgh Forge general manager Kevin Constantine discusses the new Junior A Hockey team during a press conference on February 15, 2001 at the Island Sports Center. The Forge will play in the North American Hockey League.

Brooks, was the Pitsburgh Penguins director of player development as Kevin Constantine coached the Penguins from 1997 until he was fired in December 1999. Constantine was replaced by Brooks. Constantine, was without a job and still living in the area, was approached to become president and CEO of Island Sports Center on Neville Island, and became the general manager of the Pittsburgh Forge, the newest team in the 11-team North American Hockey League Junior A Tier II division.

The Pittsburgh Forge was born and would offer several local skaters an opportunity to develop into NCAA Division I players. Three players would end up making an NHL roster.

As a new NAHL team, the Forge was permitted to sign five of its own players, and the first three of those were all local players: Richland’s Ken Trombetta, Upper St. Clair’s Dylan Reese and Chris Wey of the AAA Pittsburgh Hornets.

“About 20 players over the last three years had to leave here to find the proper competitive situation to prolong their careers. Now, they know they don’t have to leave here at the age of 15 or 16,” Constantine said.

After signing its fourth and fifth players, forwards Andy Brandt of Wisconsin and Doug Conley of Buffalo, the Forge traded its first overall pick in the NAHL draft to the Springfield Jr. Blues for two more tender offers. One of those went to forward Sean Berkstresser of Apollo, who played in 2000 for the Pittsburgh Hornets. At the draft, the Forge selected Bethel Park defenseman Dennis Kirstein, who also played for the Hornets.

The Forge, played their home games at the 1,250-seat Island Sports Center, and surprised the league with exceptional play in the first season. Despite Constantine returning to the NHL to coach the New Jersey Devils in January 2002, the Forge were paced to a second place finish in the East Division by area players like Michael Handza, Pat Levendusky, and Reese. The Forge (37-15-4) became the first expansion team in NAHL history to make it to the finals of the Robertson Cup tournament.

After sweeping the Cleveland Barons in a first-round series, the Forge beat the Texas Tornado, two games to one, to advance to the finals where they were swept by Compuware Ambassadors in two games.

“It was a great year. I didn’t come in expecting to go to nationals,” said first-year player Josh Coyle of Cleveland. “It was an expansion team. I didn’t know what to expect. [But] we were all brothers.”

The team improved in their second season with five more victories and would set a league record for 43 wins.

The team’s success on the ice – a .75O winning percentage – did not translate well at the box office. Just before playoffs started, the players learned that the team would be relocating in Tolodo at the conclusion of the season, to become the Toledo IceDiggers.

The Forge advanced to the finals again in their second season. On April 25, 2003. Jim Gehring who lead team in playoff scoring, notched a hat trick, as the Forge defeated the Texas Tornado, 4-2, to capture the Robertson Cup (NAHL championship) and earn a trip to the U.S. Junior A Gold Cup.

On May 3, 2003, Mike Handzu’s goal with 8:17 left in the game broke a 1-1 tie and helped lift the Forge to a 3-1 victory over the Soo Indians in the final game of the USA Hockey Junior National Championships. 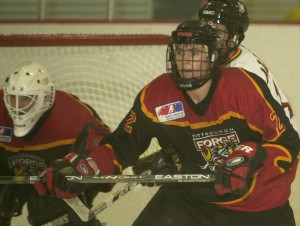 Defenseman Dylan Reese works in front of the Pittsburgh Forge goal Monday January 21, 2002 during a game against Cleveland at the Island Sports Center.

All told the team developed 18 players into Division I players, and three players, Grant Lewis, Dylan Reese, and Peter Mannino made it to the NHL.

Goaltender Mannino played 13:02 in his NHL debut for the New York Islanders on November 28, 2008. Mannino made 40 saves against the Chicago Blackhawks to win his first NHL start for the Islanders.

Lewis played only one game in the NHL, on March 3, 2009, with the Atlanta Thrashers.

Playing for the New York Rangers, Reese made his NHL debut on March 4, 1010 and scored his first NHL goal on March 16 against the Vancouver Canucks.

The transfer of the team to Ohio had one benefit, however, on August 8, 2003, the school officially purchased the 32-acre complex for $10 million. Just twelve days later, on August 20, 2003, Robert Morris athletic director Susan Hofacre officially announced that the Colonials would field an NCAA men’s ice hockey team for the 2004-05 season. RMU’s women’s team started play in 2005-06.