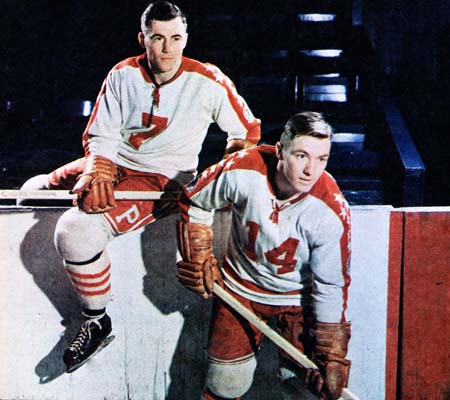 The Evolution of the Pittsburgh Hornets Uniform

This section will show you the variations in the Pittsburgh Hornets jerseys from the team’s inception in 1936-37 until the franchise disbanded after the team won their third, and final Calder Cup Championship on April 30, 1967.

The Hornets primarily wore a red-and-white scheme, a few seasons in black-and-gold and a few seasons wearing powder blue Â jerseys in the early sixties.

The image at left shows Ray (7) and Gord (14) Hanningan from the 1951-52 season, the first year the Hornets won the American Hockey League’s Calder Cup Championship.