• Awarded the Harry Holmes Memorial Trophy as the outstanding goalkeeper in the AHL all three seasons.

• Played five games in the NHL with the Toronto Maple Leafs.

• Served as assistant general manager with the expansion Kansas City Scouts in 1974-75.

• The Aldege “Baz” Bastien Memorial Award is presented annually to the American Hockey League’s best goaltender. The award winner is chosen by AHL media and players and has been presented since 1983-84.

He loved victory, like we all do, but he sure as hell knew how to handle defeat. He hated to lose, but he knew how to lose.
JOHNNY WILSON, former head coach of the Penguins, under Bastien 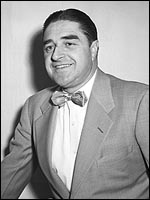 No man in Pittsburgh hockey history has climbed to the heights or plunged to the depths of hockey fortune as Aldedge “Baz” Bastien.

Bastien was an all-star goaltender for the Pittsburgh Hornets whose on-ice dominance was thwarted by a career-ending eye injury, but went on to win five American Hockey League Championships as an executive.  He returned to Pittsburgh as general manager and to help shepherd the cash-strapped Penguins, but was killed in an auto accident returning home from a team function to honor center Greg Malone.

For 17 seasons, either as a player, coach or executive, Bastien had always played an integral role for the Hornets.  He became the assistant general manager of the Pittsburgh Penguins on December 3, 1976 and later became general manager. He was named the NHL Executive of the Year in 1978-79.  In all, Bastiein represented Pittsburgh hockey organizations for 24 years of his professional life until he died on March 15, 1983 at age 63.

Bastien died of injuries and a heart attack following an accident on the Parkway West when his car collided with a motorcycle on Green Tree Hill.

Bastien played goaltender for the Port Colborn Sailers in the Ontario Hockey Association in 1939-40, spent two seasons with the Toronto Marlboros, winning the league championship as at age 21. He eventually advanced to the Cornwall Flyers in the Quebec Senior League. The 23-year-old Bastien spent two years in the Canadian army and came to Pittsburgh during the 1945-1946 season to join the Hornets. The next season – his first full one – Bastien set the league on fire with his spectacular goaltending.

For the next three campaigns Bastien won every possible award for a goaltender. Bastien was selected to the First All-Star Team three times; had the best goals-against average three times, and the recorded the most shutouts in a season for three years. 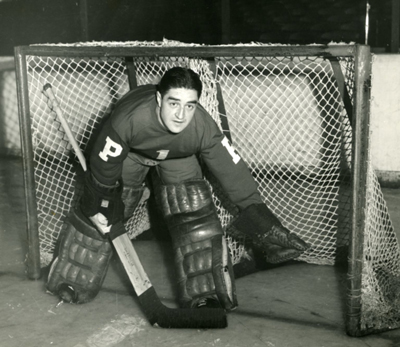 Baz Bastien with the Pittsburgh Hornets in 1946-47

He was awarded the Harry Holmes Memorial Trophy as the outstanding goalkeeper in the AHL for three consecutive years.

He was called into duty by the Toronto Maple Leafs for and made his NHL debut in 1945-46 and played five games for the NHL parent-club before being sent to Pittsburgh. Bastien was a regular invitee to the Toronto training camps and drew some attention from Toronto media as a possible candidate to challenge Maple Leaf goalie Walter “Turk” Broda in 1949-50.

On September 30, 1949, the opening day training camp at Welland, Ontario, Bastien’s playing career was abruptly ended when he was hit by an errant puck and lost the sight of his right eye.

Bastien immediately moved into the front office, but did make an attempt to return to the ice with a mask.  After retirement from the ice was inevitable, Bastien steadily rose through management positions and earned a reputation of a being one of the game’s sharpest executives. At age 45, he became a member of the AHL’s Board of Governors.

The Hornets became inactive when the Duquesne Gardens were torn down after the 1955-1956 season and Bastien left to become the Business Manager with the Hershey Bears where he won two Calder Cup Championships. Bastien stayed with Hershey for five years until the Civic Arena was completed and the Hornets franchise was reactivated for the 1961-62 season.

Bastien had been affiliated with four clubs that won the regular season championships and five times his teams have been Calder Cup champions, including three titles with the Hornets. 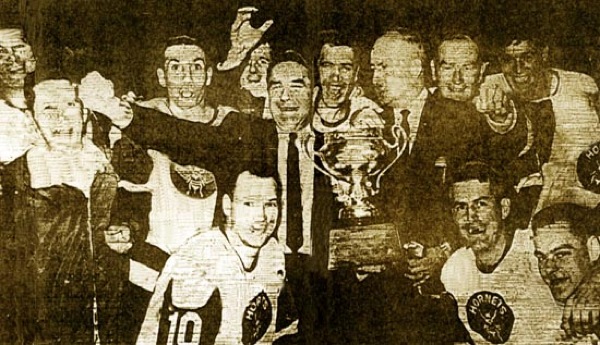 The last championship was won at the Civic Arena on April 30, 1967. The Hornets finished the sweep of Rochester in the Calder Cup Final after Billy Harris scored 26-seconds into overtime. It would be the last goal in Pittsburgh Hornets history. Bastien was coaching behind the bench but did not witness the historical goal: I was looking down our bench with my back toward their goal. Never saw it, Bastien admitted after the game.

Bastien would take a job as an assistant GM with the Hornets parent club, the Detroit Red Wings. He worked there with former Hornets player Sid Abel.

In 1974-75 NHL expansion, Bastein joined Abel with the Kansas City Scouts as an assistant general manager before returning to Pittsburgh in 1976.

Bastien faced mild criticism for trading Pittsburgh’s first round draft pick on three occasions and traded some of Pittsburgh’s stars in order to maintain payroll and to bring new faces to the team. Bastien traded All-Star MVP Syl Apps in the beginning of November 1977 to acquire Dave ‘The Hammer” Schultz. Later in that month he sent superstar Pierre Larouche to the Montreal Canadiens for Pete Mahovlich and Peter Lee.

The morning after Bastien died the Penguins asked the NHL to cancel their scheduled game with the Minnesota North Stars one night later, but the game had to be played because it (had) an immense bearing on the North Stars battle for first place in the Norris Division with the Chicago Blackhawks,” The Penguins lost to the North Stars, 3-2, and would finish the season 2-5-1.

The Pens played the final three home games that season and the players wore a simple, black armband on the left sleeve.

At a funeral at St. Louise de Marilac Church in Upper St. Clair, Rev. Robert Reardon summed up Bastien’s life: “The thorns do not cancel out the roses. Baz was a family man (a man who) didn’t like to lose, a man with a long list of achievements.”