• The Casino – the birthplace of ice hockey in Pittsburgh – was destroyed by fire on December 17, 1896. The city would have to wait for three more years to have another indoor rink – Duquesne Garden – for recreational skating and ice hockey.

• The Duquesne Garden was the fourth ice rink in the world to use a Zamboni ice resurfacing machine.

• The Garden was the first hockey rink to use glass above the dasher boards. Developed locally by PPG, Herculite was first tested in Pittsburgh. Most rinks were using wire mesh before the shatterproof glass was invented.

• Original bricks from the Gardens are now on display at the CONSOL Energy Center.

The Gardens will be a beehive of activity. Farm shows, live theater, sporting events and political rallies – this will be the vertex of the Pittsburgh social scene.

CHRISTOPHER MAGEE, owner of the Duquesne Garden, in a Pittsburgh Commercial Appeal article in May 1896

Built in 1890, The Duquesne Traction Company in Oakland was opened as a car barn before being converted to a multi-purpose facility by Pittsburgh political powerbroker Christopher Lyman Magee.

Magee was a savvy numbers guy. At age 16, he was a clerk in the city comptroller’s office and by the time he was 23-years-old he became the city’s elected treasurer. In his first term, he reduced the city’s debt from $14 million dollars to $8 million. Magee resigned from office after one term and studied the political structure of Pittsburgh and quickly became a political king-maker.

Magee was keen on public transportation investments; he ran railroads and brokered large real estate ventures. Magee was as generous as he was shrewd. In 1898, Magee’s company built and stocked a zoo inside Highland Park as a gift to the residents of Pittsburgh. (After his death in 1901, he bequeathed nearly $4 million to start what is now known as Magee Women’s Hospital.)

Magee spent nearly $500,000 to purchase and renovate the building in 1895. He renamed the structure Duquesne Gardens in 1896, although it was always called it the “Arena” by the locals. The Duquesne Garden was located at 110 N. Craig Street near Fifth Avenue in the city’s Oakland neighborhood.

Early on, the building was used to host rodeos and the circus. It held a movie theater and an indoor ice skating surface that was unrivaled in North America. The Gardens featured Pittsburgh Golden Gloves boxing. 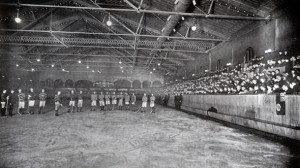 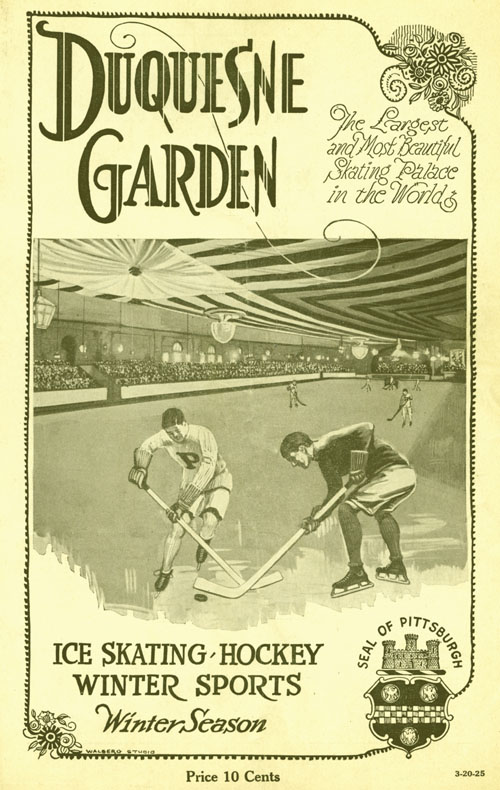 The ice surface was nearly 50 feet longer than today’s NHL rinks and had state-of-the-art refridgeration and resurfacing technology. Program covers called the Garden: “The Largest and Most Beautiful Skating Palace in the World.” The competition and ice surface garnered the attention of hockey players all across Canada. Many top-notch Canadian players came to play in front of capacity crowds of 5,000 in Pittsburgh.
The Duquesne Garden did not see much ice hockey between 1910 to 1915. Games were played at The Winter Gardens inside Exhibition Hall located near the city’s Point. It was used for recreational skating and amateur hockey matches for teams like the Ft. Pitt Hornets and the Pittsburgh Yellow Jackets. The Winter Gardens burned to the ground in April 1912.

The Pittsburgh Yellow Jackets of the United States Amateur Hockey Association were formed in 1915. They evolved from amateur to semi-pro and were one the earliest organized teams in Pittsburgh.

The PAA Seven hockey club called the Garden home for amateur competitive hockey in 1919. The PAA Seven won 30 out of 34 games played that year and shared the ice surface with the Carnegie Tech hockey club and the University of Pittsburgh hockey team.

The Yellow Jackets were sold to James Callahan and William Dwyer and were renamed the Pittsburgh Pirates. The Pirates joined the NHL on November 7, 1925, and the ice sheet was reduced to conform to NHL standards. The first NHL game played in Pittsburgh was on December 2, 1925, in which 8,200 fans paid $1 to see the 8:30 p.m. faceoff at the Garden. The Pirates lost to the New York Americans in overtime, 2-1. Lionel Conacher scored the lone goal for Pittsburgh at 9:15 of the second period.

In 1929, the Pirates played their fifth – and final season. That season saw the Pirates achieve their worst season by only winning 5 of their 44 games.

Things didn’t improve financially either. With the stock market crash of 1929, followed by the Great Depression, the Pirates owners found themselves in financial difficulties and in need to replace the aging Duquesne Garden. 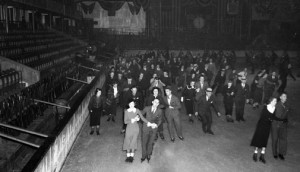 The Pirates moved across the state to play in Philadelphia, but failed miserably both on and off the ice. The franchise hoped the a new facility in Pittsburgh would help save the team. Ultimately, a new arena wasn’t built.

The Yellow Jackets returned to Pittsburgh in 1930 after Roy Schooley re-acquired the team. The Yellow Jackets played for two years before the team was purchased in 1932 by Pittsburgh theatre chain owner John Harris. Harris, the founder of the Ice Capades, purchased a new $5,000 sanitary soda fountain for the Garden and renovated a portion of the building to become one of the largest dance halls in the country.

In celebrating it’s 40th anniversary, the Garden still had one of the highest-regarded ice surfaces in North America, still drawing hockey players from Canada.

The Birth of the Pittsburgh Hornets

On October 4, 1936, Harris purchased the Detroit Olympics of the International-American Hockey League and merged them with players from the Yellow Jackets and the IHL’s Pittsburgh Shamrocks. The team was renamed Pittsburgh Hornets.

The Hornets played their first game at the Garden on November 8, 1936, a 5-2 win over the Cleveland Barons.

End of the Line for the Old Trolley Car Barn

The Gardens (as it started being called around 1950) would be home for the Hornets for another 20 seasons before they lost to the Cleveland Barons, 6-4, on March 31, 1956. The Hornets would be inactive for the next five years.

Demolition started on August 13, 1956, to make way for the Plaza Park Apartments and a local fixture, Stouffer’s Restaurant.

What’s Remains of the Gardens? 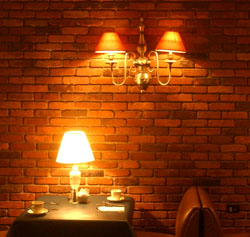 The Gardens would be replaced as the home rink of the city’s pro hockey teams. Construction of the Civic Arena began in 1958, three miles to the west of the Gardens.

Duranti’s closed for good in December 2008 and the bricks were removed and stored for two years. The operators of Pittsburghhockey.net donated bricks to CONSOL Energy Center for an historical display in the new arena.