â€¢ Erin Whitten, a goaltender for th Phantoms, was the first woman to play professional hockey in Pittsburgh.

â€¢ Pittsburgh native Jamie Adams played as a left winger on the team.

Stopping was a little freaky at first. I used to roller skate with a big ‘ol stopper in the front and the wheels were two in the font and two in the back.

Roller Hockey Under the Dome Lasted One Summer

The Pittsburgh Phantoms were the brainchild of new Penguins owner Howard Baldwin. Less than a year after the Pittsburgh Penguinâ€™s claimed their second Stanley Cup championship, Baldwin – along with co-owners Morris Belzberg and Thomas Ruta – hoped to tap into Pittsburghâ€™s insatiable lust for hockey. 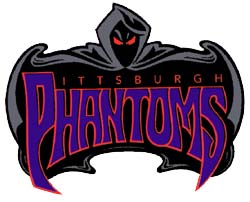 Baldwin looked to galvanize what Stevens later called â€œthe start of a dynastyâ€ in a cup victory celebration at Pittsburghâ€™s Three Rivers Stadium.

The enthusiastic Baldwin was a well-respected member of the NHL Board of Governors and was very instrumental in resolving the NHL strike in March of 1992.

Baldwin asked for a new uniform style to be designed for the Penguins that led to a boost in team-related merchandising. The team was defending itâ€™s second straight Stanley Cup championship, winning the President Cup for finishing first overall in the NHL with a franchise-best record of 101 points.

He â€œtook the highâ€ road in regarding a potential push to replace the aging Civic Arena (then the third oldest building in the NHL) settling instead for renovations that included luxury suites and F-level balconies to increase the capacity of the arena to 17,537.

Baldwin purchased franchises in the Continental Soccer League and Roller Hockey International. The end result was the creation of the Pittsburgh Stingers and the Pittsburgh Phantoms. Both teams would use the Civic Arena for home games and the most expensive ticket for adults for both new teams will cost $11, the least expensive was $9. Penguins tickets, by comparison, ranged from $30 to $47.

The Phantoms were coached by the Penguinsâ€™ second all-time scorer, Rick Kehoe and another former Penguin, Warren Young, who split time behind the bench and as a player.

The Phantoms played their first game on June 5, 1994 against the New England Stingers and won, 10-5, at the Cumberland County Civic Center in front of 2,467 fans. Trevor Buchanan scored the franchiseâ€™s first goal. Thirteen days later on June 18, the Phantoms would win a 10-9 shootout over the Atlanta Fire Ants before a crowd of 7,347 in their first game at the Civic Arena.

In a League of Her Own

On July 13, 1994 Erin Whitten (RIGHT), became the first woman to play a professional hockey game for a Pittsburgh team. 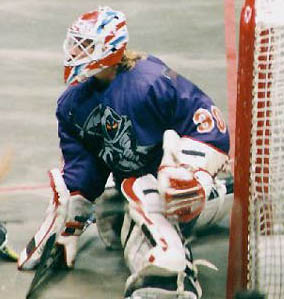 The game was also the first matchup of women proessional goaltenders. New Jersey Rockin Rollers’ goaltender Manon Rheaume, who played a preseason game with the NHL’s Tampa Bay Lightning in 1992, made 24 saves to beat the Phantoms, 10-7, in their first franchise loss. A year earlier Whitten became the first female to win a professional game as Toledo Storm beat Dayton, 6-5, on October 30, 1993.

Pittsburgh native forward Jamie Adams, the only hockey player from Shaler Area high school to have his number retired, played as a left winger on the team.

On August 25, 1994 the Civic Arena roof opened to the Space Odessy theme song while the Phantoms played the Minnesota Arctic Blast. It was the first time the stainless steel dome was opened for a professional hockey game.

The team played 22 regular season games (finishing with a 13-9 record), managed a second place finish in their division and secured a spot in the post-season.

The Phantoms knocked off the Chicago Cheetahs in the first round of the playoffs before falling to the Minnesota Artic Blast in round two.

On August 27, 1994, with 46 seconds left in franchise history, Scott Burfoot scored the last Phantoms goal against the Artic Blast.

Solid efforts earned several players invitations to Penguins training camp at the end of that year. Unfortunately, none impressed enough to be offered contracts.