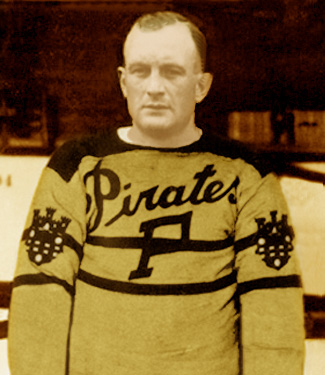 The Pittsburgh Pirates were named after Pittsburgh’s baseball team with the same name.

The Pirates were the first team in the city to wear black & gold – the colors of the Pittsburgh city crest. The baseball Pirates wore red and blue until 1948 and the Pittsburgh Steelers didn’t join the NFL until 1933.

The Pirates wore bright yellow wool jerseys with black trim stripes with a “P” on the front of their jerseys in 1925-26 (LEFT). The team used the Pittsburgh’s city crest emblems from older police jackets on the uniform sleeves. The first year jerseys appear to be inherited from the Pittsburgh Yellow Jackets old jerseys. 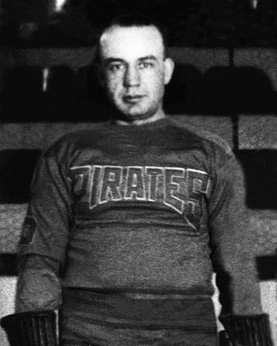 The Pirates featured new jerseys in 1928-29 (RIGHT) that were gold with blue striping. The word “Pirates” written in arched, blocked lettering. The city crest on the sleeves was replaced with a “P”. 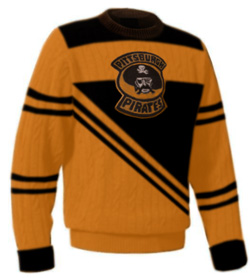 In 1929-30 (LEFT) the Pirates switched to black and orange uniforms for their fifth and final season.

The wool jerseys featured a chain-knit logo of a pirate face with an eye patch and hat with skull and cross bones. The jersey featured double striping on the sleeves and a diagonal background behind the crest.