â€¢ Max Kaminsky became the third coach of the Hornets.

â€¢ The Hornets got off to their best start in franchise history, going 7-2-1 in their first ten games of the season.

â€¢ Bob Gracie & Bobby Walton were the AHL’s top scorers – each recorded 95 points in the season. The 95-point mark was the highest team total to date and the team finished first in the AHL for goal scoring with 267.

â€¢ Two AHL records were set on March 17, 1945: Pittsburgh & Cleveland set the mark for most goals scored in one period by netting a combined 12 goals in the third period (Pittsburgh 7, Cleveland 5). The total goals scored in the game – 22 – is also a one-game record â€“ the seventh highest scoring game in league history.

â€¢ Walton and Roger Bessette were selected to the AHL All-Star team.

â€¢ Bob Gracie tied an AHL record for most unassisted goals in one season (7).

November 8, 1944 – Pittsburgh was shut out by the Hershey Bears 11-0 to set an AHL mark for the highest scoring shutout.

February 24, 1945 – Bobby Walton and Bob Gracie set an AHL record for most points in a game with eight each. Walton had two goals and six assists. Gracie had three goals and five assists.

February 25, 1945 Gracie & Walton set an AHL record for points scored in one game with eight apiece. 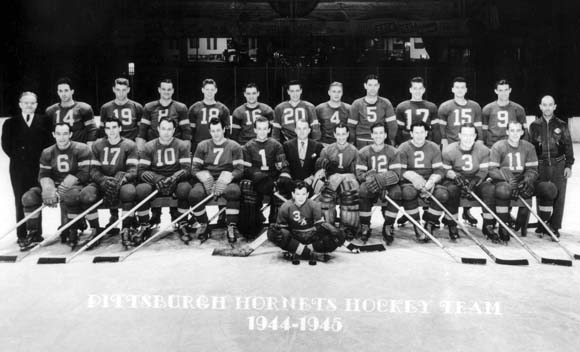