â€¢ Baz Bastien’s 2.60 GAA was the AHL’s best. Bastien also set a record for four shutouts on the road and a total of seven on the season. The seven shutouts tied an AHL record set earlier by Hornets goaltender Alfie Moore in 1937-38.

â€¢ Max Kaminsky ended coaching career with the Hornets with a.562 winning percentage. Kaminsky won 91 games, lost 68 and tied 27 in his 186 games behind the bench.

â€¢ Ernie Dickens led the the league’s defenseman with 30 assists.

October 30 – John O’Flaherty had one goal and five assists vs. Philadelphia and Don Metz scored two goals 1:17 apart to establish a team record for the fastest successive goals by the same player.

January 26, 1947 – The Hornets and Buffalo Bisons skated to a 0-0 tie. It was the second 0-0 tie in team history; the other game was also against Buffalo.

February 16, 1947 – The Hornets and the Buffalo Bisons skated to a scoreless tie. It was the third 0-0 tie in team history; the other two games were also against Buffalo.

March 15 – 1947 – The Hornets and Cleveland Barons skated to a 0-0 tie, The Hornets played in three scoreless ties – an AHL record.

March 22, 1947 – The Hornets defeated the New Haven Ramblers, 3-2, at the Duquesne Gardens to win a best-of-three playoff series and andvance to the semi-finals.

March 27, 1947 – The Hornets defeated the Buffalo Bisons, 2-1, to sweep the semi-finals. The Hornets would face the Hershey Bears in the Calder Cup Finals.

April 15, 1947 – The Hornets returned to the AHL Finals for the second time in team history, but lost to the Hershey Bears, 5-0, in Game 7 of the Calder Cup Championship. 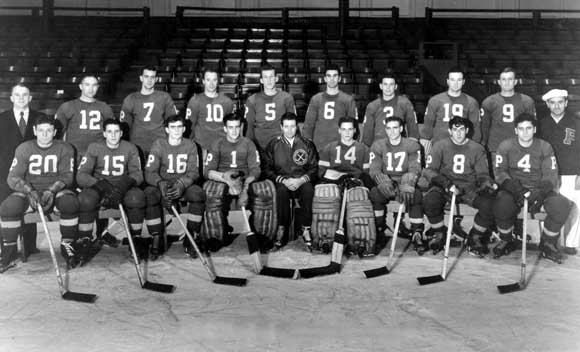