â€¢ The Hornets emerged from five years of inactivity and played their first game at the Civic Arena, a 2-1 loss to the Buffalo Bisons, on October 14, 1961 in front of 9,317 fans. The first Hornets’ goal at the Civic Arena was scored by Paul Jackson (left) – his only goal of the season.

â€¢ For the first and only time in team history, five goalies were used in the same season. Goaltending surrendered 367 goals, the highest in their team history leading to the largest goal differential in team history. (177 GF and 367 GA). 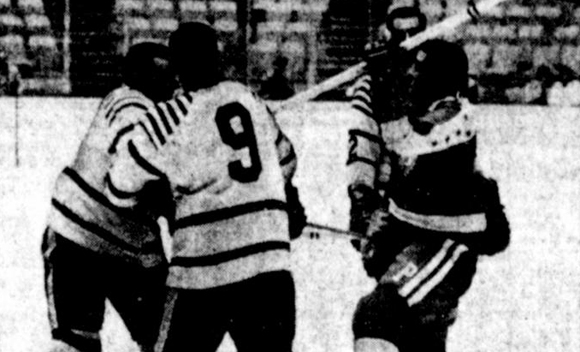 October 25, 1961 – Cleveland Barons Jack Ferguson swings a stick at Pittsburgh’s Dick Mattiussi in the first period at the Civic Arena. Â The Barons won in overtime, 5-4.