• The Pirates missed the playoffs after finishing in fourth place.

October 9, 1926 – Ty Arbour was traded to Pittsburgh by Vancouver Maroons (WHL) for cash.

October 28, 1926 – John McKinnon traded to Pittsburgh by the Montreal Canadiens for cash.

December 16, 1926 – Lionel Conacher was traded to New York Americans by Pittsburgh for Charlie Langlois and $2,000.

Last night the New York Americans defeated the Pittsburgh Pirates by 2 to 0.  Lionel Conacher was a tower of strength, not only on the back line, but in some glowing attacks.

A bigger league, a trade that shouldn’t have been made

The 1926-27 season brought substantial changes to the NHL. The Western Canada Hockey League (WCHL) had disbanded at the end of 1925-26, and many of the WCHL’s top players came east to join the NHL. Bill and Bun Cook, Frank Boucher, Eddie Shore, and George Hainsworth were some of the WCHL’s stars who would join NHL teams. The Pirates acquired only left wing Ty Arbour, who had played for the Vancouver Maroons. With the addition of the Rangers, Blackhawks, and Cougars (later Red Wings) in 1926-27, the NHL was now a 10-team league split into two divisions – American and Canadian. The three newcomers joined the Pirates and Bruins in the American Division. The Bruins and first-year Rangers dominated their division in the regular season, while the Ottawa Senators and Montreal Canadiens were top teams in the Canadian Division. The rest of the teams, including the Pirates, followed behind.

Odie Cleghorn came to Pittsburgh in late October for the start of the second Pirates season. He said the Pirates would be much improved from the previous year. Defenseman Johnny McKinnon had been acquired from the Canadiens for cash, and left wing Mickey McGuire, who had played in Cleveland and Minneapolis, had signed on as a free agent. Departed Pirates were defenseman Jesse Spring and left wing Louis Berlinguette. The addition of McKinnon and McGuire filled this gap. McKinnon could chip in on offense. Milks and Darragh were the only Pirates in 1926-27 who would top McKinnon’s 13-goal total.

Cleghorn said that he would add at least two more players to the Pittsburgh roster. The unnamed players were said to be “two of the best in the game.” As it turned out, “two of the best” did not come to the Pirates. Instead, this season would be marked by the departure of one of the Pirates’ top stars.

News from training camp centered around Lionel Conacher. He was supposed to have reported on October 25 with the other Pirates. He came to camp on November 5. Conacher said he had been on a hunting trip and had received his report-to-camp notice only on the previous day. This clearly didn’t fly with Cleghorn. The Pittsburgh Press reported it was certain Cleghorn gave Conacher “a severe reprimand” when he arrived. Conacher was also fined $200.

At first, Pittsburgh’s on-ice performance appeared unaffected by the tumult. The Pirates emerged with three wins in their first four games. After losing a nail-biter at home to the Americans in the season opener, 1-0, Pittsburgh defeated the Rangers, Blackhawks, and Cougars by a combined score of 11-5. But in almost a mirror image of their first year, the Pirates’ fast start out of the gate was followed by a debilitating winless streak that lasted almost a month. The Pirates were tied with the Rangers in first place after their first four games, but the 0-6-1 run that followed left the Pirates in the American Division cellar.

The Pirates were perhaps at their lowest point during a home game on December 4, when they held a 3-0 lead over the Boston Bruins with just over 11 minutes to play in the third period. The Bruins scored three times in five minutes to tie the score and then scored in overtime to take the game, 4-3. Cleghorn demanded that the Pirates’ play improve, or more serious action would follow. The Pittsburgh Press said Cleghorn knew the Pirates had been too careless and had not taken their work seriously. In their next two games, however, the Pirates remained flat. A 5-2 loss to the Canadiens and a 2-2 tie with the Maroons followed on Duquesne Garden ice. During a one-week layoff after the Maroons game, the Pirates sent team captain Conacher packing in a very one-sided trade. 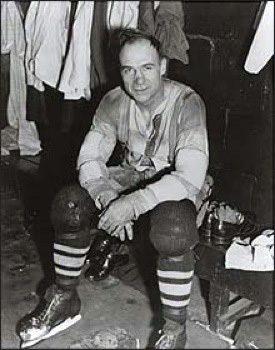 On December 16, Conacher was dealt to the New York Americans. All that the Pirates received for their highly talented (if disgruntled) captain was $2,000 plus 32-year-old defenseman Charlie Langlois, whose NHL career did not last past 1928. In contrast, the 25-year-old Conacher would star in the NHL through 1937 and make the first or second NHL all star teams three times. The Boston Globe said that Conacher was unhappy in Pittsburgh because he was not chosen to manage the team. When the job instead went to Cleghorn, who, the Globe said, the Pirates coach made matters worse by trying unsuccessfully for a year to trade Conacher to the Boston Bruins for his brother Sprague. Interestingly, when Odie Cleghorn left the Pirates in 1929 in a bitter split with the new management of ex-boxer Benny Leonard, he would tell the Pittsburgh Post-Gazette that several players, including Conacher, had been traded against his wishes. It is easier to accept Cleghorn’s claim in the case of players traded during the regime of the very hands-on Leonard. Conacher was the only one of these players traded during the earlier Townsend ownership. The thought that the Townsends or Callahan would trade a player of Conacher’s caliber away over Cleghorn’s objections is dubious. This is especially so in light of Cleghorn’s earlier efforts to deal Conacher to Boston and the flap over Conacher’s late arrival to training camp. If Cleghorn’s wishes were overruled, perhaps Cleghorn objected not so much to Conacher leaving the Pirates but to how little Pittsburgh received for him.

No matter who instigated the infamous trade, the swap would haunt the Pirates.  Conacher had starred for Pittsburgh since he came to the city to play for the Yellow Jackets in 1923. From all indications, he was not a good fit with Odie Cleghorn. But if he had to be traded, the Pirates should have received far more than Langlois in return. Hockey writers have justifiably called this exchange one of the worst in NHL history. Conacher had elevated the Yellow Jackets to championship status with his presence and that of the players he recruited for the team. The Pirates who followed in the Jackets’ wake were of playoff caliber as a result. The trade of Conacher for Langlois in retrospect was a significant part of a chain of events that sent the Pirates on a downward spiral. It had to be insulting to Conacher and a keenly felt loss to the players who stayed behind.

The Pirates, now with Harold Cotton as team captain, met the Americans for the first time following the Conacher trade on December 23 in New York. Conacher was directly involved in both New York goals as the Americans won, 2-0. He set up center Normie Himes perfectly on the first goal and scored the second goal himself. The New York Times called Conacher “a tower of strength” who constantly thrilled the small Madison Square Garden crowd of 3,000. The Pirates had to miss what the Toronto Star termed Conacher’s “indomitable spirit.”

The trade did nothing to pick up the Pirates’ flat performance. Although the Star said a month after the trade that Langlois was “playing his best hockey in two seasons,” his best days were actually behind him. Without Conacher, Pittsburgh played at a 12-22-2 level the rest of 1926-27 and finished eight points out of a playoff spot behind third-place Chicago. A highlight of the season was a 6-1 Pittsburgh win in Ottawa on January 18, 1927. The fast-skating Pirates handed the Senators only their third loss of the season out of 21 games. It was the start of a 5-1-0 spurt that put the Pittsburgh in third place at the end of January. But any chance at the playoffs then slipped through the team’s hands. The Pirates were winners in only 4 of 19 tries in February and March. The slump led a columnist to note derisively in a New York Rangers program that the “Smoketown crew” of Pittsburgh had settled into a position in the League which is about as good as an ex-amateur outfit could hope for. The position the Pirates wound up with in the end was fourth place. The crew’s 15-26-3 final record was second-worst in the NHL. Only the first-year Detroit Cougars had a poorer year.

Odie Cleghorn told the Pittsburgh Press that Pirates would undergo an overhauling before the start of the following season. He said at least four to five Pirates (unnamed) would not be returning to Pittsburgh. The Press speculated that the only Pirates who would be sure to keep their jobs would be Milks, Darragh, and Arbour.

The 1926-27 season had also been marked by upheaval in the Pirates’ management when Henry Townsend died January 15, 1927, following an operation. The Duquesne Garden president was only 50 years old. Townsend’s son, Horace, succeeded him. The Townsend family and James Callahan continued to run the Pirates. The gate was a constant problem. The Pirates drew only 45,000 to their 22 home games in 1926-27, an average of just over 2,000 fans per game. The Townsends and Callahan kept the Pirates in Pittsburgh, but questions about the team’s future refused to go away.