January 17- Obtained Ron Stackhouse from Detroit for Jim Rutherford and Jack Lynch. Obtained Bob Kelly, Ab DeMarco and Steve Durbano from the St. Louis Blues for Greg Polis, Bryan Watson and a second round choice in the 1974 Amateur Draft.

• The Penguins named Ron Schock the team captain, the first since their second season.

• Jean Pronovost scored a goal in seven consecutive games from February 27 though March 10.

• The “Century Line” of Syl Apps, Jean Pronovost and Lowell MacDonald combined for 107 goals – the second highest in the NHL.

• Apps finished seventh in the league scoring with 24 goals and 61 assists for 85 points.

• On April 7, 1974 Andy Brown surrendered six goals in a loss to the Flames in Atlanta. It was the last time a goaltender played an NHL game without a mask. 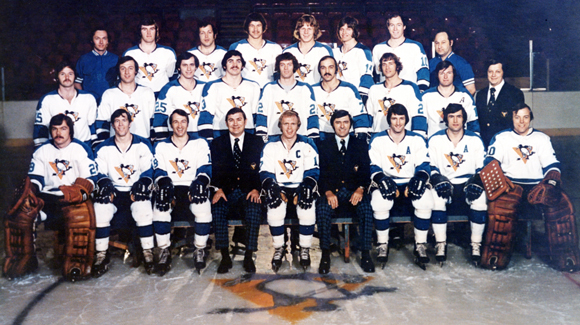