September 13 -Ã‚Â Obtained Rick Kehoe from Toronto for Blaine Stoughton and a first round choice in the 1977 Amateur Draft.

• Penguins selected Pierre Larouche in first round of the 1974 Amateur Draft and William “Buzz” Schneider, who later would win a Gold Medal for the 1980 USA Olympic Team.

• Syl Apps was named MVP of All-Star Game at Montreal Forum. He was joined on the Prince of Wales squad by teammates Pierre Larouche and Jean Pronovost.

• Pens recorded the 200th franchise victory with a 6-1 victory win over Chicago on January 29 at the Civic Arena.

• Penguins squandered a 3-0 lead in playoffs to NY Islanders. It was only the second time in NHL history a team has rallied from a 3-0 deficit. 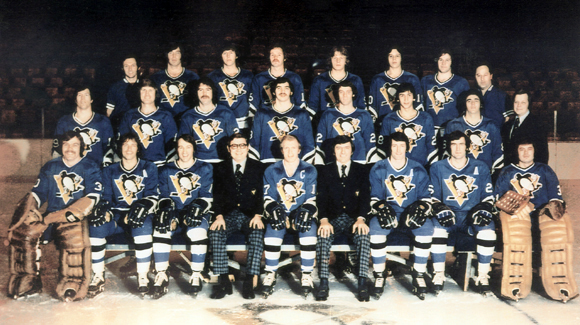 * Ã‚Â The NHL took ownership of the Penguins from June to July, before Al Savill, Otto Frenzel & Wren Blair took the team ownership.