October 11 -Ã‚Â Obtained Randy Hillier from Boston for a fourth round choice in the 1985 Entry Draft.

• Penguins won five games in a row from December 5 through December 15.

• Lemieux scored two goals and one assist to win MVP honors at the 1985 All-Star Game in Calgary.

• Lemieux finished with 100 points (43+57) becoming only the third rookie in NHL history to score 100 or more points in a season.

• Lemieux became the first Penguins player to be honored with the Calder Memorial Trophy for Rookie of the Year.

• Young and Lemieux each scored over 40 goals, the first time two Penguins rookies topped the 40-goal mark in one season. 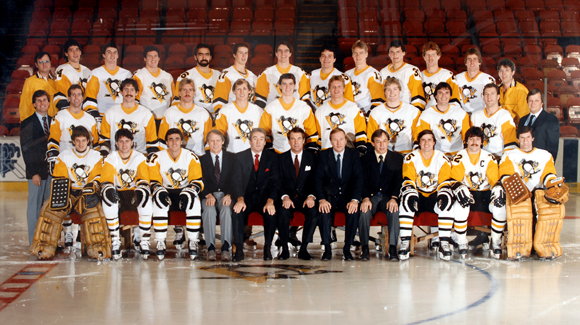 Rookie of the Year:
Mario Lemieux