• Wendell Young recorded the first Penguins’ shutout in two seasons with a 6-0 blanking of the NY Rangers on November 14.

• Buffalo defeated the Penguins in the final game of the regular season to knock the Penguins out of the playoffs.

• Mario Lemieux recorded a 46-game scoring streak (39-64-103), second longest in NHL history, from October 31 through February 11. The streak was halted when Lemieux left the Penguins-Rangers game with a back injury.

• The Penguins won seven home wins in a row from February 8 through March 17.

• Penguins drafted Czechoslovian right wing Jaromir Jagr with the fifth pick in the first round of the 1990 Entry Draft. 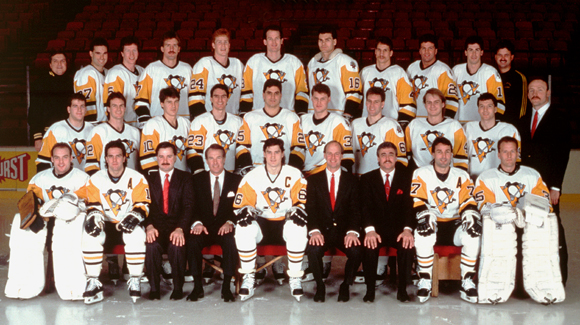 Rookie of the Year:
Mark Recchi