August 10 -Ã‚Â Obtained Jocelyn Thibault from Chicago for a 4th-round pick in 2006 draft.

Traded Cory Cross to the Detroit Red Wings in exchange for a fourth-round draft pick in 2007.

Traded Mark Recchi to the Carolina Hurricanes for Niklas Nordgren, Krys Kolanos and a second-round pick in 2007.

Claimed center Andy Hilbert off waivers from the Chicago Blackhawks.

• The Penguins selected Sidney Crosby in the Entry Draft on July 2005.

• The Penguins and Carolina Hurricanes participate in the first shootout for both teams on October 7. The Hurricanes would defeat the Pens.

• Sidney Crosby scores on the final shot of the shootout – the first ever at Mellon Arena – to give the Penguins a win over the Montreal Candiens on November 10.

• On November 19, two native Pittsburghers squared off on Mellon Arena ice for the first time ever. Philadelphia’s R.J. Umberger’s had an assist on his first visit to Pittsburgh as an NHL player. The Penguins’ Ryan Malone was the other player born in Pittsburgh.

• Coach Ed Olczyk was replaced by Michel Therrien on December 15.

• Mario Lemieux played in his final NHL game on December 16 against the Buffalo Sabres.

• The Penguins beat the Montreal Canadiens, 6-4, on January 3. All of the Penguins goals were scored by rookies. (Crosby-2, Ouellet-2, Talbot, Endicott).

• John LeClair scored his 400th NHL goal on March 29 against the Florida Panthers.

• Craig Patrick was fired as General Manager on April 20.

• The Penguins named Ray Shero General Manager on May 25.
[divider_top] 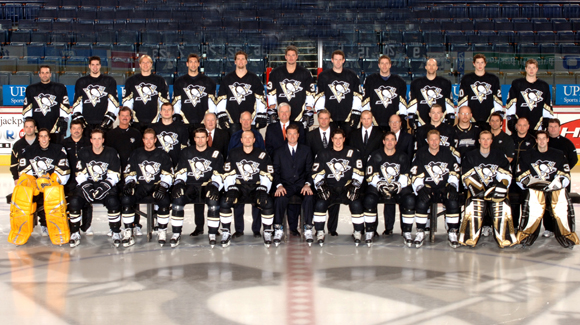 Rookie of the Year:
Sidney Crosby