– Traded Dominic Moore to Minnesota for third round pick in 2008.

– Traded a fourth round pick (2007) to Florida for Joel Kwiatkowski.

– Traded seventh round pick (2007) to San Jose for Nolan Schaefer.

October 5 – Marc Andre Fleury set an NHL record for saves in an opening-game shutout with 40 stops in a victory over the Philadelphia Flyers.

October 21 – Staal became the youngest player in the history of the NHL to score on a penalty shot.

October 28 – Sidney Crosby scored his first NHL hat trick in a win against the Flyers.

November 1 – Malkin, who scored a goal against the Los Angeles Kings, became the first player in 89 years to score a goal in his first six NHL games.

November 8 – Nils Ekman’s three goals in 4:10 against the Tampa Bay Lightning is the fastest hat trick in team history and Ekman’s first of his career.

November 25 – Sergei Gonchar recored his 500th career point with an assist against the New York Rangers.

December 13 – Gonchar set a career-best, five point game with two goals and three assists against the Flyers.Ã‚Â  It was also Crosby’s first six-point a game of his career.

December 15 – Ryan Malone scored a hat trick against the New York Islanders – the first of his career.Ã‚Â  In the same game, Mark Recchi recorded his 800th assist in his career.

January 7 – Recchi scored his 1,300th NHL point in a game against the Tampa Bay Lightning.

January 20 – Malkin records the first five-point game of his career against the Toronto Maple Leafs.

January 26 – Mark Recchi became the 38th player in the history of the NHL to score 500 goals after scoring twice against the Dallas Stars.Ã‚Â  Recchi was the third Penguins player to score 500 goals.Ã‚Â  (Lemieux and Mullen were the others)

February 10 -Ã‚Â Staal scored three goals, including the overtime winner, against the Toronto Maple Leafs on Saturday night, making him the youngest player in NHL history to score a hat trick.

February 14 – Malkin scored a goal to give him one point in 13-straight home games, breaking Mario Lemieux’ rookie record.

February 19 – The Pens saw their 16-game points streak stopped by the New York Islanders. It was the second-longest points streak in team history.

Malone recorded a hat trick by scoring all three goals within one minute from the start of each period – the first such feat in NHL history.

March 2 – Crobsy’s goal against the Carolina Hurricanes makes him the youngest player in NHL history to record 200 points.

March 4 – The Penguins beat the Philadelphia Flyers for the eighth time in one season.

The Pens finish the season with 105 points – 47 more than the previous season and qualify for the playoffs for the first time in six seasons.

April 7 – Crosby beomes the youngest player in NHL history to win the Art Ross Trophy for winning the scoring title.

May 31 – Crosby is named the team captain, the youngest in NHL history.

June 14 – Crosby became the youngest winner of the Hart Trophy (League MVP) and the Lester B. Pearson Award (NHL players’ selection of MVP). Evgeni Malkin becomes the third Penguins player in team history to win the Calder Trophy as the league’s outstanding rookie. 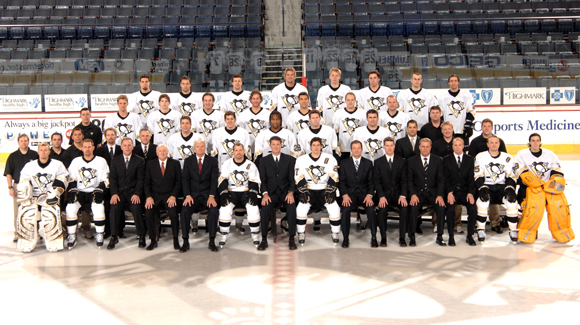