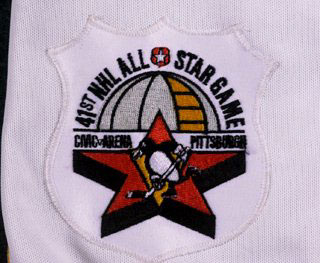 The 1990 NHL All-Star Game was played in the Pittsburgh Civic Arena on January 21, 1990. Hometown captain, Mario Lemieux, scored four goals and was named the game’s MVP.

The Penguins wore the patch on their left shoulders throughout the 1989-90 season and about 10 games into the 1991 season.

A complaint from the Chicago Blackhawks (who hosted the 1991 All-Star Game) forced the Penguins to change to a new set of jerseys in 1991 without the All-Star patch.