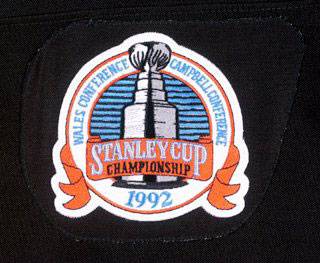 In 1991-92 the Pittsburgh Penguins wore this patch on the upper right chest when they reached the Stanley Cup Finals against the Chicago Blackhawks.

The Stanley Cup patch was sewn on a separate piece of material and covered over NHL’s 75th Anniversary logo.
Pittsburgh also wore a 25th Anniversary patch on the right shoulder.

The jerseys in that year also featured a third patch, worn on the left shoulder, to honor Badger Bob Johnson.