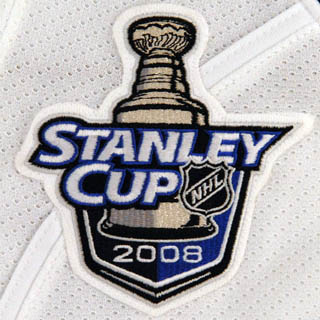 The Pittsburgh Penguins wore this patch on the upper right chest area (see photo below) in the 2008 Stanley Cup final when they faced the Detroit Red Wings.

A Stanley Cup final set of home and road jerseys featured the patch and had the 2007-08 Stanley Cup Finals tag sewn to the fight strap and a set tag on the inside hem. (See photo below at left).

The players kept their home, or black, jerseys and the road white jerseys were made available to the public.