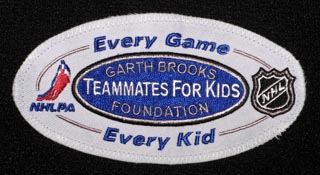 The 2007 Teammates for Kids Auction features jerseys worn by all players on each of the 30 NHL team rosters during one select home game in January.

Pittsburgh wore the jerseys at home on January 7, 2007 against Tampa Bay.

Each jersey was authenticated with a one-of-a-kind embroidered patch – emblazoned with the NHL, NHLPA and Teammates for Kids â€œEvery Game. Every Kid.â€ logo â€“ and has been security-tagged, serial numbered and registered into the NHL-MeiGray Group Game-Worn Jersey Authentication Program. Each jersey comes with a Letter of Authenticity from the NHL and NHLPA.

Penguins jerseys raised over $37,000 for the auction.

The Pens jerseys have a team patch inside the rear hem with a mistake that reads: “1/9/07.”

In November 2005, the National Hockey League and National Hockey League Playersâ€™ Association jointly selected the Garth Brooks Teammates for Kids Foundation as the official childrenâ€™s charity of the NHL and NHLPA. This league-wide alliance included players from all 30 NHL Member Clubs and utilizes the League and Playersâ€™ Associationâ€™s full platform of marketing resources. The partnership focused on the Top Shelf Teammates program, a division of the Garth Brooks Teammates For Kids Foundation, which contributes financial resources to non-profit organizations that benefit children’s health, education and inner-city services. Since its inception, more than $1.5 million has been donated by NHL players.

As a result of the NHL playersâ€™ involvement in the auction, the NHL has become the first professional sports league to achieve 100% athlete participation in the Garth Brooks Teammates for Kids Foundation.