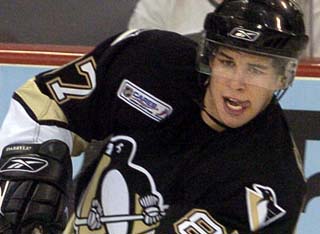 For the first period of Pittsburgh’s home opener against the Boston Bruins, players wore jerseys bearing a special patch confirming the club and player’s commitment to the people and communities impacted by Hurricane Katrina.

The jerseys, donated by Reebok, featured a one of a kind embroidered patch located on the top right chest, emblazoned with the “NHL NHLPA Cares Katrina Relief Fund” logo.

This was the largest game-worn jersey auction ever conducted by the NHLPA and NHL.

The auction took place between November 14th 2005 and continued through November 29th.

Sidney Crosby has the Midas Touch

Crosby, a consistently golden playmaker on the ice for the Penguins, turned a hockey sweater into gold for the sake of Hurricane Katrina vicitms.

An unnamed collector paid a price of $21,010 for the jersey Crosby wore on opening night at the Mellon Arena on October 8. Crosby wore the dark jersey, trimmed in Las Vegas Gold, and a commemorative patch in the first period only.
The game worn jersey – despite being on the ice slightly under six minutes – earned the highest price in the auction. That’s about $58 per second. A total of 94 bids were placed on Crosby’s one-period-wonder. $7929 was the second highest price paid for Alexander Ovechkin’s of the Washington Capitals. An authentic, pro-style jersey with Crosby’s name and number sells for $360 at Pen’s Station inside the arena’s pro shop.

Two other recent Crosby jerseys captured the imagination of the sports memoribilla world. Crosby’s Team Canada jersey worn in a gold-medal win over Russia in the championship on January 4, 2005 in Grand Forks, N.D., was stolen by an Air Canada baggage handler. The jersey was found outside a post office in Lachute, Que. by a postal worker a week later. It was auctioned off, with the proceeds going toward youth hockey charities and south Asian tsunami relief. The jersey yielded an astounding high bid of $22,100.

Crosby’s white jersey from his first NHL game in New Jersey was unaccounted for after disappearing from his father Troy’s checked luggage on a US Airways plane on October 9, 2005. That jersey was found two days later in a non-public stairwell by an airline employee and returned to Crosby’s father.