Former Penguins defenseman Zarley Zalapski has died at the age of 49.

Zalapksi was Pittsburgh’s fourth overall pick in the 1986 entry draft.

Zalapki played in 190 regular season games and 11 playoff games for Pittsburgh. On March 19, 1988, Zalapski’s scored his first NHL goal against Philadelphia’s Ron Hextall after being set up by Mario Lemieux and Robbie Brown.  It came in a season when the franchise highlighted John Cullen (11), Zalapsky (33), Brown (44), Lemieux (66) & Paul Coffey (77) made up the members of the “Double Trouble” promotion. 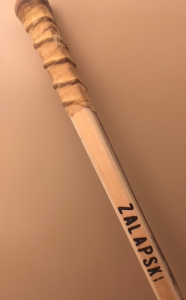 Zalapski, John Cullen and Jeff Parker were traded to  the Hartford Whalers for Ron Francis, Ulf Samuelsson and Grant Jennings in a 1991 trade that would become solidify the roster on the team’s first Stanley Cup championship.

Zalapski played in the NHL for eight seasons with Hartford, Calgary, Montreal and Philadelphia. He retired in 2010 after playing five seasons in in Austria and Switzerland.

Zalapski was a member of the Canadian team that finished fourth in the 1988 Winter Olympics in Calgary.

With 135 points, Zalapski is 11th in scoring for defensemen in Penguins’ history.

Zalapski fittingly finished with 33 goals in Pittsburgh, the same as his uniform number.

Zalapksi was the third former Penguins player to die this year:

HERE’S A COMPLETE LIST OF THE 31 OTHER PENGUINS PLAYERS THAT HAVE HAVE PASSED ON TO THE CHAPTER ETERNAL.