It was the fourth time in NHL history that a game was decided by a single, penalty shot goal and the second time the Penguins fell victim to the rare 1-0 feat.

Little was awarded the penalty shot 14:46 into the first period after he was hooked by Penguins’ defenseman Ben Lovejoy. Little notched his team-leading 14th goal on a shot over Jeff Zatkoff’s left shoulder.Â  The penalty shot was the second Zatkoff faced in his career, having previously stopped Edmonton’s Benoit Pouliot on Nov. 28. Winnipeg goaltender Connor Hellebuyck made 30 saves for the Jets’ shutout. 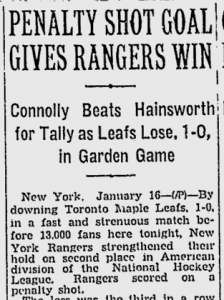 Rangers’ Bert Connolly scored on Toronto Maple Leafs goaltender Geroge Hainsworth at Madison Square Garden.Â  Connolly was awarded the penalty shot when Toronto’s Frank “Buzz” Boll hooked and tripped Butch Keeling as the Rangers’ forward was heading to the net in the first minute of the second period. NHL rules at that time dictated that the head coach could select any shooter to make the attempt.

Connolly started from behind his own goal and skated quickly to center ice to gather the puck on his approach on the penalty shot.Â  It was only the second penalty shot goal the Rangers scored at the Garden. Dave Kerr earned the shutout for the Rangers.

The uniqueness of the Connolly goal stood for 70 years until Toronto’s Chad Kilger scored on a penalty shot against Pittburgh’s Marc-Andre Fleury on March 19, 2006 at the Mellon Arena. 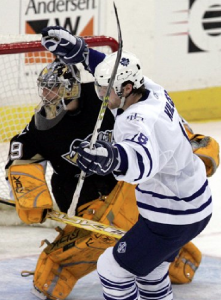 Kilger was awarded the penalty shot with a little more than six minutes remaining in the scoreless tie when he was upended by Pens’ defenseman Rob Scuderi.Â  Kilger’s wrist shot sailed over Fleury’s stick side for his 14th goal of the season.Â  Toronto goaltender Mikael Tellqvist made 21 saves for the shutout.

The final regular season game in 2013-14 for the Montreal Canadiens and the New York Rangers was scoreless at the end of regulation beforeÂ Brian Gionta scored on a penalty shot at 2:04 of overtime to give the Canadiens a 1-0 victory on April 12, 2014.Â  Gionta was awarded the shot when he was tripped by Rangers defenseman Raphael Diaz on a breakaway. Carey Price stopped all 41 Rangers’ shots for the shutout.