Today is the 50th anniversary of the Penguins franchise being awarded by the NHL. The NHL announced that it would double in size on Feb. 9, 1966. Pittsburgh joined the league with the Philadelphia Flyers, Los Angeles Kings, St. Louis Blues, Minnesota North Stars and Oakland Seals.

The Pittsburgh Penguins today unveiled the logo for their 50th anniversary season in 2016-17.

â€œWeâ€™re looking forward to a season-long salute of a half-century of Penguins hockey,â€ said David Morehouse, President and CEO of the Penguins. â€œWeâ€™re excited to honor our history, and we think our fans will enjoy the many activities that we have planned. We will have more announcements related to the anniversary heading into next season.â€ 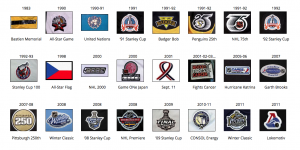 It will be the 27th uniform patch worn on a jersey.

The logo will undoubtedly be used as a uniform patch and on official game pucks.

Karen Beaudway, whoÂ commented on the Penguins’ site, points out what might be a design flaw with the logo: “I trust the logo will be updated when we win the cup this year, to show all 4!Â Congrats, Pens, on 50 great years of NHL hockey in the Burgh!”

One thing that is obvious, is the Pittsburgh Gold. Â Here’s hoping the team’s uniforms use that on a regular basis.