ROUND 1 – The Pittsburgh Penguins defeat the Columbus Blue Jackets, 4-2.
ROUND 2 – The New York Rangers beat the Penguins,  4-3. 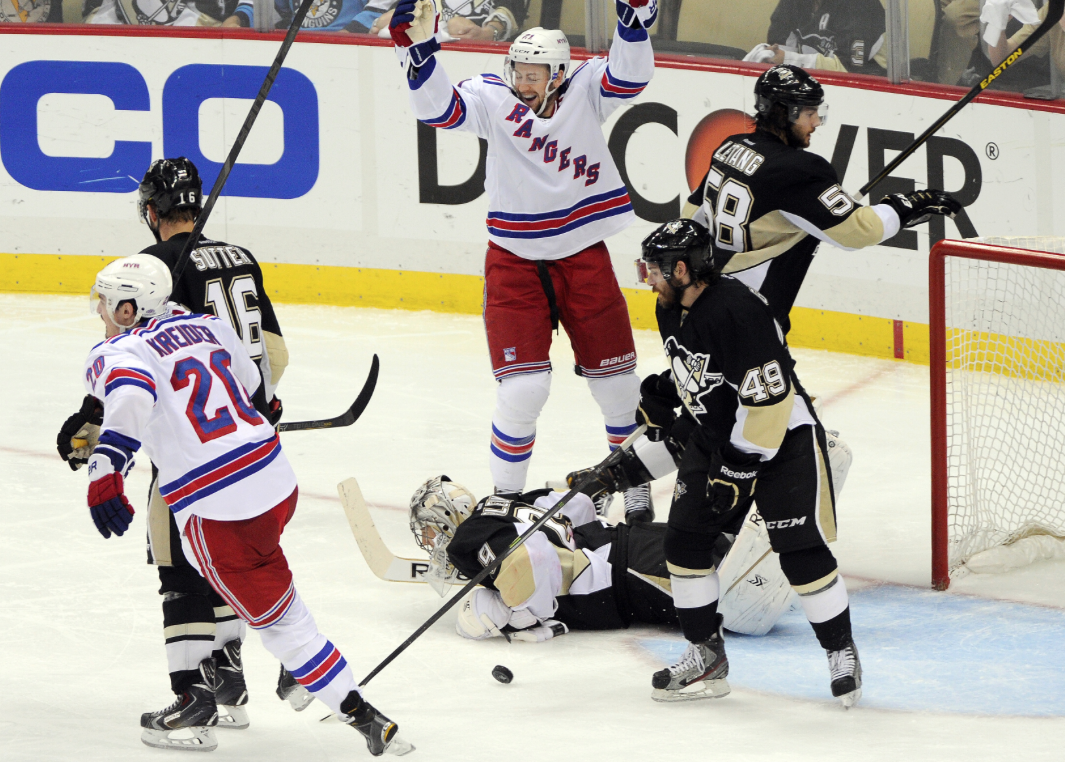 PENS OUSTED The Rangers’ Chris Kreider and Derek Stepan celebrate a power play goal by Brad Richards during the second period of Game 7 of their second-round Stanley Cup playoff series.

October 3 – Marc-Andre Fleury with penalty shot save in 27-shot shutout for his 250th win. It was the fourth time in team history that a shutout included a save on a penalty shot.

October 8 –  Jussi Jokinen scored a hat trick against his former team to lead the Penguins to a 5-2 win against the Carolina Hurricanes.

October 15 – Penguins fans will get their first look at the Edmonton Oilers trio of high-flying former first-round draft picks from 2010-12 Taylor Hall, Ryan Nugent-Hopkins and Nail Yakupov. All three players will be playing in Pittsburgh for the first time in their careers.

November 22 – Sidney Crosby scored his 250th goal in his 493rd game of his career. (Islanders)

November 27 – The Penguins marked their 300th consecutive sellout when they hosted the Toronto Maple Leafs. The streak began on Feb. 14, 2007 at Mellon Arena, and it has continued since the team moved into CONSOL Energy Center in 2010-11.

November 29 – Chris Kunitz had two goals and Sidney Crosby had three assists to give him 700 points in his career. Marc-Andre Fleury made 21 saves against Tampa Bay for his 26th career shutout.

December 16 – Philip Samuelsson made his NHL debut. This marks the fifth time in team history that a father-son duo have played for the Penguins.

December 19 – Olli Maatta became the first Penguins defenseman to score on a penalty shot since George Konik in January 31, 1968.

December 27 – Pascal Dupuis out of the lineup for the first time in 266 games (regular season and playoffs).

January 7 – The Pens defeat the Vancouver Canucks, 5-4, for the shootout win, and coach Dan Bylsma becomes the winningest coach in franchise history with 233 wins.

March 1 – The Penguins played their third outdoor game in team history against the defending Stanley Cup champion Chicago Blackhawks at Soldier Field as part of the NHL Stadium Series.  The Blackhawks won, 5-1.

March 11 – Marc-Andre Fleury made 32 saves to earns his fifth shutout of season and 28th of his career.  Pens sweep season series and extend winning streak to eight games against the Caps.

April 9 –  With a 4-3 win over Detroit, the Penguins have won 100 games at the CONSOL Energy Center.

The NHL’s clubs are re-aligned into two conferences each consisting of two divisions. The new alignment places several clubs in more geographically appropriate groupings. The Eastern Conference is made up of the Atlantic and Metropolitan divisions, each with eight teams. The Western Conference is made up of the Central and Pacific divisions, each with seven teams. All 30 teams play in all 30 arenas at least once a season.

June 13 – Pittsburgh agrees to terms with Evgeni Malkin on an eight-year, $76 Million contract.

June 24 – The Pittsburgh Penguins traded the rights to defenseman Alex Grant to the Anaheim Ducks in exchange for forward Harry Zolnierczyk.

June 30 – Penguins sent F-Tyler Kennedy to San Jose for a second-round pick in the 2013 Entry Draft.

– Exchanged a third-round pick in 2014 for Calgary’s Lee Stempniak.