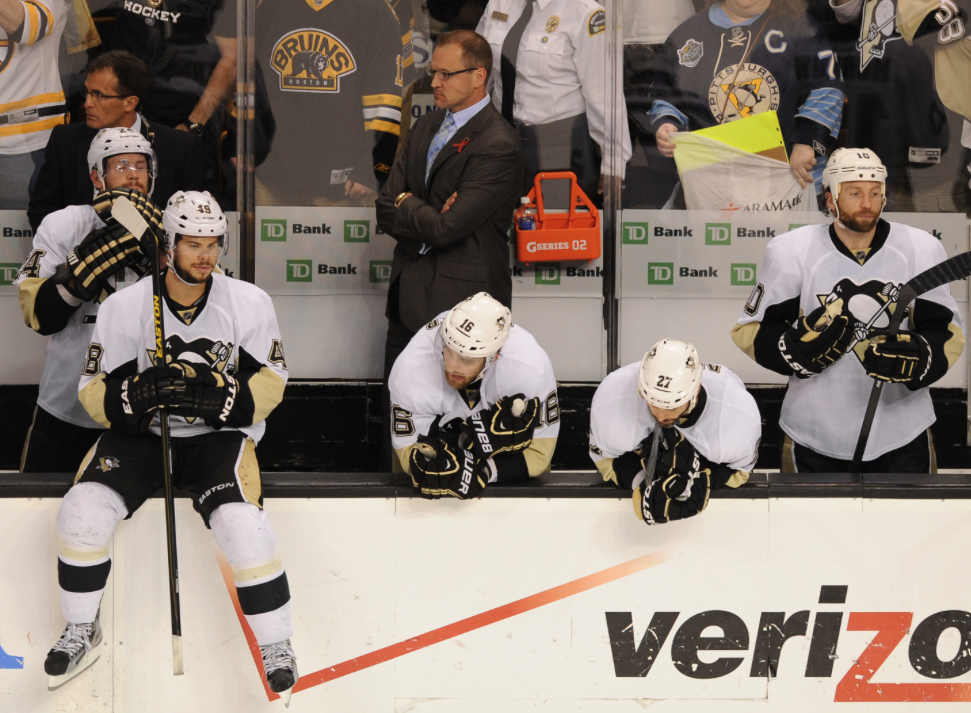 A SWARM OF B’s
Matt Cooke, Tyler Kennedy, Brandon Sutter, Craig Adams and Branden Morrow watch the Boston Bruins celebrate a sweep over the Penguins in the Eastern Conference Final.  Pittsburgh was outscored, 12-2, in the series.

January 19 – Marc-Andre Fleury stopped 26 of 27 shots to defeat the Flyers to pass Tom Barrasso as the team’s winningest goalie.  The win was 227th for Fleury.

January 31 – Tomas Vokoun stopped 28 shots and earned his first shutout with Pittsburgh, the 49th of his career.

February 3 – Chris Kunitz scored four goals against the Capitals for his second hat trick with Pittsburgh.  Jaromir Jagr was the last Pittsburgh player to score four goals in a game (10/14/2000).

February 7 – Dylan Reese made his debut in a Penguins uniform in a game against the Washington Capitals. Reese is the fourth native son to play for Pittsburgh.

February 13 – Sidney Crosby’s two assists against Ottawa brings him to 400 for his career.  It was Crosby’s 448th game, by comparison, Mario Lemieux hit that mark in 353 games.

March 10 – Chris Kunitz scored his second hat trick of the season and had two assists.  Sidney Crosby had five assists against the NY Islanders.

March 28 – Tomas Vokoun gets second shutout of season and 50th in his career to become the 26th goalie in NHL history to hit that mark.

March 30 – Vokoun blanks the New York Islanders, for the third-consecutive shutout for the Pens.  Establishes team record of shutout hockey 208:24 and Vokoun sets individual mark for not allowing a goal, 162:42.

April 9 – The Penguins clinched the Atlantic Division title, with a 5-3 win over Carolina.

The NHL’s canceled all of the preseason games, the Winter Classic and All-Star Game before reaching an agreement with NHLPA and approved a new collective bargaining agreement.  The players approved the CBA and ended the lockout on January 12.

February 6 – Traded defenseman Ben Lovejoy to the Anaheim Ducks in exchange for a fifth-round choice in the 2014 NHL Draft.

February 13 – Traded Eric Tangradi to Winnipeg in exchange for a seventh-round draft choice in 2013.

March 25 – Penguins acquired Douglass Murray from San Jose for a 2nd-round pick in 2013 and conditional pick in 2014.

April 3 – Pens acquire Jussi Jokinen from Carolina in exchange for a conditional draft pick in 2013.