2nd in the Atlantic Division, 4th in the Eastern Conference 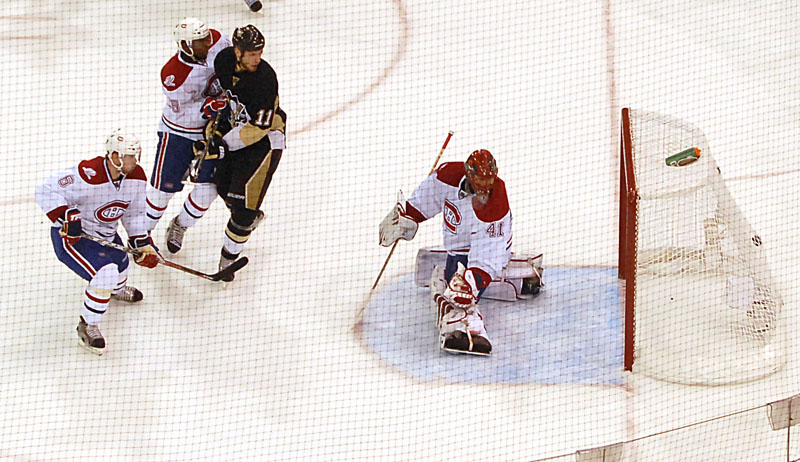 October 3 – Sidney Crosby’s goal and assist gave him 400 points for his career, the fifth fastest player to that mark.

October 7 – Brent Johnson got his first start in net, joining his father Bob as the fourth set of father and son tandem to play for the Pens.

October 11 – Matt Cooke scored his 100th goal of his career.

October 28 – Sidney Crosby recorded his third career hat trick in a 6-1 win over the Montreal Canadiens. Pittsburgh finished the month with 11 wins to establish a record for October.

November 3 – The Penguins defeated the Anaheim Ducks, 4-3, and earned their seventh win on the road from the start of the season becoming the fifth team in NHL history to reach that mark. Marc-Andre Fleury established a new record for consecutive road wins with his seventh in a row.

November 14 – Pascal Dupuis scored in overtime against the Boston Bruins for his 100th career goal.

December 3 – Sidney Crosby scored the 150th goal for his career.

December 23 – Evgeni Malkin scored his fourth career hat trick in a game against the Ottawa Senators.

January 2 – Marc-Andre Fleury stopped Tampa Bay’s Vincent Lacavalier on a penalty shot. Fleury moved to the top of the list for penalty shots faced, Fleury’s sixth penalty shot in his career and his fourth save.

January 21 – Nick Johnson notched his first NHL goal in his NHL debut. Pierre Larouche, Mario Lemieux, Alexsey Morozov and Luca Cuputi are the other Pens players to score in their first game.

February 6 – Sidney Crosby notched his 300 assist in the NHL.

February 10 – Jordan Staal played in his 329th (including playoffs) consecutive game with Pittsburgh.

March 5 – The Penguins recorded 55 shots against the New York Rangers to establish a new team record for shots in a road game.

March 18 – Marc-Andre Fleury made 17 saves against the Boston Bruins for his first shutout of the season and 16th in his career as the Pens won, 3-0.

March 20 – Carolina’s Jamie McBain scored with :00.9 remaining in overtime to defeat the Pens, 3-2. It was the latest overtime goal scored against Pittsburgh.

April 8 – Sidney Crosby recorded his 500th point in his career during a contest with the New York Islanders in the last regular season game at Mellon Arena.

April 11 – Sidney Crosby recorded his 50 and 51st goals a contest with the New York Islanders in the season finale. Crosby tied Steve Stamkos for the Rocket Richard Award.

May 2 – Jordan Staal was out of the lineup for the first time in 358 games. Staal held the record of consecutive games played, playoffs included.

May 4 – Marc-Andre Fleury made 18 stops for his fourth career shutout in the playoffs to defeat the Montreal Canadiens, 2-0.

The league took a break from February 15 to February 28 to allow the players to participle in the 2010 Winter Olympics in Vancouver. Because of the Winter Olympics break, there was no NHL All-Star Game for 2010.

March 1 – Obtained defenseman Jordan Leopold from Florida in exchange for a second round pick in the 2010 NHL Amateur Draft.

March 3 – Obtained a sixth round draft pick from Toronto for defenseman Chris Peluso.