Second in the Atlantic Division, Fourth in the Eastern Conference 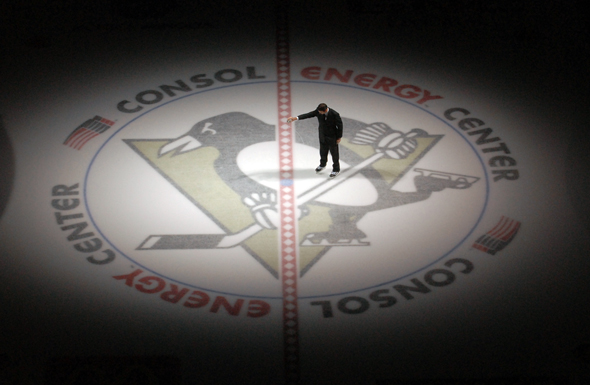 October 7 – The Penguins christened the CONSOL Energy Center with a game against cross-state rival, Philadelphia Flyers. The Flyers won, 3-2.

October 30 – Brent Johnson made 33 saves and earned his first shutout for the Penguins to beat the Carolina Hurricanes, 3-0.

November 19 – The Pens defeated the Carolina Hurricanes in the first shootout at the CONSOL Energy Center.

November 24 – Marc-Andre Fleury stopped 30 shots from the Buffalo Sabres to earn his 17th career shutout and Pascal Dupuis scored the only goal as the Pens won, 1-0.

November 27 – Sidney Crosby scored his 200th career goal and his sixth career hat trick in a game against the Calgary Flames.

January 1 – The Penguins lost the Winter Classic to the Washington Capitals, 3-1, in front of 68,111 fans at Heinz Field.

January 5 – Evgeni Malkin scored seven seconds into the game to start the 8-1 drubbing of the Tampa Bay Lightning. Chris Kunitz scored his first hat trick with the Pens and Marc-Andre Fleury stopped Steve Stamkos on a penalty shot.

January 25 – Marc-Andre Fleury made 29 saves for his 18th career shutout and Craig Adams scored the only goal as the Penguins beat the Islanders, 1-0.

February 2 – Max Talbot scored the 50th goal of his career and 100th point of his career. Goaltenders Brent Johnson and Marc-Andre Fleury combined for the third shared shutout in franchise history by defeating the Islanders, 3-0.

March 25 – Marc-Andre Fleury made 21 saves for his 19th career shutout and James Neal scored the only goal in the shootout as the Penguins beat the Devils, 1-0.

April 20 – James Neal scored 3:38 into the second overtime to defeat the Tampa Bay Lightning, 3-2 in game four of the first round.

The Boston Bruins defeated the Vancouver Canucks in the Stanley Cup Final in seven games to win the Stanley Cup. It was the sixth Cup win in Bruins’ franchise history. For the fourth consecutive season, the season started with games in Europe. The 58th All-Star Game was held at the RBC Center in Raleigh, North Carolina, home arena of the Carolina Hurricanes, on January 30..

This was the final season of operation for the Atlanta Thrashers, who were sold to True North Sports and Entertainment out of Winnipeg, Manitoba, and moved from Atlanta to Winnipeg to become the “new” Winnipeg Jets.

February 24 – Acquired Alex Kovalev from the Ottawa Senators in exchange for a seventh-round draft pick in 2011.