Second in the Atlantic Division, Fourth in the Eastern Conference

ROUND 1 – The Pittsburgh Penguins lost to the Philadelphia Flyers, 4-2. 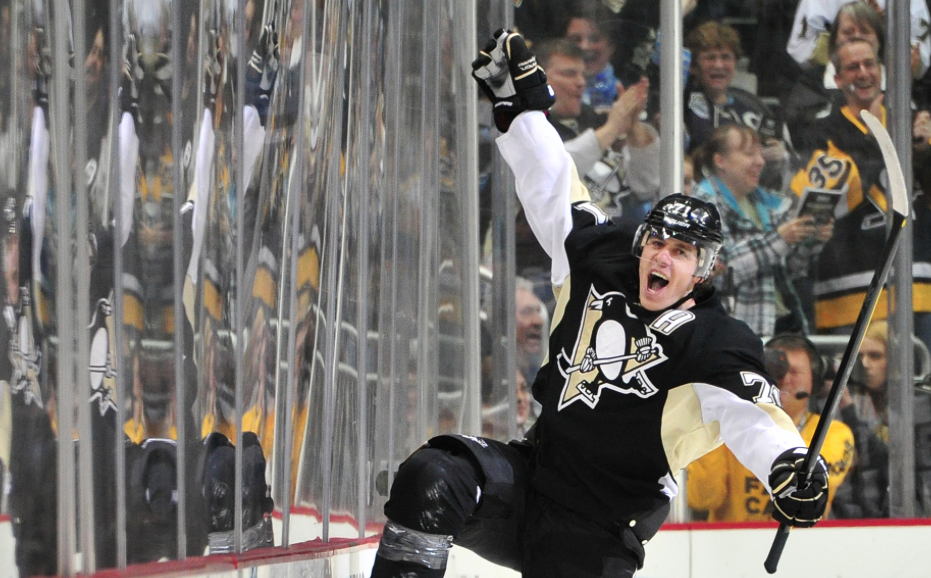 GENO IN A BOTTLE
Evgeni Malkin scored his 50th goal of the season on April 7 against Philadelphia and became the ninth Pittsburgh player in team history to hit the milestone.  Malkin finished the season with 109 points, to lead the NHL.

October 6 – Evgeni Malkin scored the decisive goal in the shootout and Matt Cooke scored twice coming off his season-ending suspension. The power play went two-for-two and Kris Letang had two points in his 100th NHL game.

October 7 – Jordan Staal recorded his 200th point in the NHL with an assist on a goal against the Calgary Flames.

October 13 – Chris Kunitz’ assist against the Capitals was his 100th point with the team.

October 25 – Dan Bylsma coached his 200th game in the NHL and Marc-Andre Fleury made 33 saves against the New York Islanders for his 20th career shutout.

November 15 –  Penguins forward James Neal became the first NHL player to score at least one goal in each of his team’s first eight home games when he scored against the Colorado Avalanche.

November 21 – Sidney Crosby had two goals and two assists in his first game back from a 320-day absence.  Marc-Andre Fleury made 29 saves for  his second shutout of the season and 21st of his career.

November 25 – Paul Martin played in his 500th NHL game.  A new high attendance mark was set at the CONSOL Energy Center as a standing-room-only  crowd of  18,610 saw the Pens and the Ottawa Senators.

Novemeber 29 – Evgeni Malkin moved to tenth on team’s all-time scoring list with a goal against the New York Rangers.

December 23 – Steve Sullivan recorded his 700th point in the NHL with an assist on Jordan Staal’s goal against Winnipeg.

December 27 – With a goal and assist, Jordan Staal was the number one star of the game – his 400th NHL appearance.

January 15 – Evgeni Malkin had five points and scored a natural hat trick in the third period, his eighth hat trick with the Pens. Malkin, with 51 points, finished the game one point behind Vancouver Canucks Henrik Sedin in the scoring race.

February 18 – Matt Cook’s short-handed goal against the Flyers was the first three-on-five shorthanded goal since Mario Lemieux pulled the feat against the Los Angeles Kings on February 13, 1988.

February 21 – Marc-Andre Fleury made 27 saves for his 22nd shutout to  tie Tom Barrasso in all-time shutouts. Pittsburgh had goals from Evgeni Malkin and Steve Sullivan.   It was the first time the Penguins defeated the Rangers at the CONSOL Energy Center.

February 25 – In a game against the Tampa Bay Lightning, Evgeni Malkin had his second natural hat trick of the season, ninth in his career.

March 11 – Evgeni Malkin notched his 500 career point, in a game against  the Boston Bruins.

March 20 – Evgeni Malkin’s first goal against Winnipeg was his his 200th goal and James Neal scored his first hat trick with the Pens.

March 25 – Marc-Andre Fleury established a new career high for wins in a season (41) after defeating the New Jersey Devils, 5-2.

April 5 – The Penguins won their 50th game of the season as Marc-Andre Fleury won his 226th victory of his career to tie Tom Barrasso.

April 7 – Evgeni Malkin scored his 50th goal of the season and became the ninth Pittsburgh player in team history to hit the milestone.  Pascal Dupuis finished the season with a 17-consecutive game scoring streak, the longest in the NHL this season.

The NHL modified rules and penalties to address contact with the head.

November 8 – Traded Mark Letestu to the Columbus Blue Jackets for a fourth-round pick in the 2012 Entry Draft.

February 1– Claimed forward Cal O’Reilly off of re-entry waivers from the Phoenix Coyotes.